Julia Tyler, Interim Executive Director
I am honored to join Johnson Service Corps as the new interim executive director. To introduce myself, I have a religious studies degree from Macalester College in MN. I was the Director of Religious Education at the Eno River Unitarian Universalist Fellowship in Durham for the last seven years and served as Director of Religious Education at the Unitarian Universalist Church in Ventura, CA for four years before that. My life's work has centered around racial and environmental justice in faith communities, and I am inspired by our mission to nurture young adult leaders committed to racial justice and sustained by spiritual practice. I am excited to support young adults in experiencing service and the many meaningful opportunities Johnson Service Corps provides. I look forward to meeting you and to all that we will achieve together. Christina Balderson, Operations Director
A graduate of Mary Baldwin University in Virginia, Christina comes to us with a diverse background of corporate administrative and management experience. She has been a parishioner of The Chapel Of The Cross for over 20 years, where her son Carter and daughter Isabel, were baptized and confirmed. She is most proud of her work as a mother and wife. Scott, her husband of 30 years, was a former mentor of JSC where she first got the opportunity to appreciate the extraordinary people associated with this program.

Stephen Elkins-Williams, Chair
The Rev. Stephen Elkins-Williams served as Rector of the Chapel of the Cross, an Episcopal parish on the campus of the University of North Carolina, Chapel Hill, from 1985-2015. Prior to that, he received a BA in Philosophy from Gonzaga University, Spokane, WA, and a Masters of Divinity from Regis College, Toronto, Ontario as part of his Jesuit training. A few years after his ordination, he was received as an Episcopal priest. As Rector, he helped found the Johnson Service Corps to form servant leaders for the Church and for the world. He now serves as Priest in Residence at St. Stephen’s Episcopal Church, Durham, while fulfilling a third two-year term on the JSC Board. Stephen’s commitment to JSC stems from his lifelong dedication both to social justice and to the formation and education of young people. Day Smith Pritchartt, Vice Chair
Day has been involved with Johnson Service Corps for most of the five years she has lived in North Carolina, first as a mentor and now as a Board member. Her background is in Christian Formation; she holds a Master of Arts from Virginia Theological Seminary and has worked in parish formation for many years. She currently serves as the Executive Director of the Episcopal Evangelism Society, a national grant-making foundation that supports innovative ministry projects. Day enjoys contributing her formation and mentoring experience to the life-changing formation experience that JSC provides. Her favorite part of Board work is knowing the corps members, and she dreams of a world where all young adults have the opportunity to consider counter-cultural alternatives for their lives. Most recently, she is excited for the opportunity for transformation through racial equity that current events have made a more visible priority for JSC. Day lives in Durham, has three adult daughters, and is a member of the Episcopal Church of the Advocate. 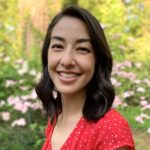 Kirsten Chang, Secretary
Kirsten was a JSC corps member in 2017-18 (she lived in the Carrboro house and served with the Orange County Department on Aging at the Seymour Center). While Kirsten is not an Episcopalian, she greatly appreciated using her time in the Episcopal Service Corps to explore many spiritual experiences, from Quaker meetings to Buddhist meditations to a Baha'i book club. She is originally from Black Mountain, NC, and graduated from UNC-Chapel Hill with an English degree in 2013. Now she works as a communications specialist at the Institute for Emerging Issues at NC State University. She was drawn to the Johnson Service Corps initially because of its emphasis on servant leadership, community values, and openness toward spiritual discovery, and these are all qualities that make her proud to be a current board member. Elizabeth Brewington
Elizabeth is a native North Carolinian, who spent most of her life in Greensboro before deciding to explore the Midwest for college. She graduated from the College of Wooster in Ohio, where she received a dual Bachelor of Arts in sociology and religious studies. After college, she returned to North Carolina and did a year of service with the Johnson Service Corps (2017-2018). During that time, she lived in Durham and worked with Eastern Durham Children's Initiative. Elizabeth now works for the NC Council of Churches as their Opioid Response Project Coordinator. Barbara Day
Barbara is a longtime parishioner of Chapel of the Cross and serves in a variety of roles in the life of the church, including: Lay Eucharistic Minister, member of the Global Mission Committee, Leader for Morning Prayer, and a recent Vestry Member. She has worked as a teacher, assistant superintendent of Chapel Hill schools, and as Professor and Chair of Curriculum and Instruction in the School of Education at the University of North Carolina, Chapel Hill. During those later years, she received her Master of Divinity Degree from Duke University Divinity School, a Post Graduate Diploma in Anglican Studies, and a Doctor of Ministry from Virginia Theological Seminary. She is drawn with great joy to continue working with young adults who are exploring new options in their learning and development, while rendering valuable service within the community. Chuck Hennesse
William E. “Chuck” Hennessee is a cradle Episcopalian born in Durham, NC and christened at St. Titus Episcopal Church in 1962. His family moved to Fayetteville, NC where he spent his formative years and worshipped primarily in the Baptist church until he attended the University of North Carolina at Chapel Hill. As a radio announcer, his father instilled in him the importance of giving back to the community. Chuck began his career as public-school teacher in Raleigh, NC and was confirmed at St. Ambrose Episcopal Church. He attended North Carolina Central University where he received his MA in Middle Grades Education with a concentration in History. He moved to Durham to supervise the school buses and returned to worship at St. Titus for the last 25 years serving as an Outreach Chair, Lay Reader, Choir member, and Member of the Vestry. He retired from Chapel Hill Public schools in 2015 after 30 years in the NC public education. In 2018, Chuck began serving as a mentor for the Johnson Service Corp. In 2019, he returned to full time work as Program Manager with AVID Center out of San Diego, CA supporting school districts in the eastern Carolinas. The Rev. Hershey Mallette Stephens
The Rev. Hershey Mallette Stephens is a native North Carolinian. Baptized and raised at St. Ambrose Church in Raleigh. She served in the Presiding Bishop’s Office of Evangelism, where she was Project Lead for the Beloved Community Storysharing Campaign. This work afforded her the joy and opportunity to hear stories of faith, race and discovery from Episcopalians of all ages and backgrounds from all over the country. Rev. Mallette Stephens enjoys listening and learning from children and young people, dreaming up new and fresh ways to tell the story of God in Christ, and creating celebrations--she once obtained a donkey for a Palm Sunday parade in downtown Manhattan!

Rev. Mallette Stephens now serves as Dean of the Historic Chapel at St. Augustine’s University in her hometown of Raleigh, NC. She is married to her favorite person Rob, National Political Director for Repairs of the Breach, and mother to beautiful baby boy Jeremiah, Benevolent Ruler of the Mallette Stephens household. Carol Harrison Marshall
The rare cradle Episcopalian, Carol moved to Chapel Hill from Alabama in 1963, when she became a member of the Chapel of the Cross. Carol was educated in the Chapel Hill – Carrboro City Schools graduating from CHHS in 1969 and Saint Mary’s Junior College in 1971. In 1973 she completed her degree in elementary education so she could fulfill her lifelong dream of teaching. After teaching for twenty-three years, Carol completed the newly formed Master’s in School Administration at UNC-CH. Her administrative career included being an assistant principal at Carrboro Elementary, planning principal for Mary Scroggs, and principal of George Watts Elementary in Durham.
As a member of The Chapel of The Cross, her most meaningful responsibilities are as a lay eucharistic minister and becoming a member of the founding chapter of the Reverend Doctor Pauli Murray Chapter of Daughters of the King. As a board member of Johnson Service Corps, she hopes that these service areas will provide her with the chance to support a program she has long admired. In addition, Carol’s background in education will be a valuable tool in her assignment as Personnel Committee Chairperson. Henry W. Sappenfield
Henry’s joining of the JSC Board arises out of his and his family’s commitment to their neighbors and larger community. A native of Oklahoma, Henry met his North Carolina-born wife Liz on an archaeological dig in Scotland. After graduate school, law school, and several moves, they adopted Durham as their hometown in 2007, joining St. Philip’s Episcopal Church and starting a family. In addition to raising their three young children, Henry and Liz are active in investing in Durham, and seeing that all of its residents are provided for and supported. Henry is a partner at Kennon Craver, PLLC, practicing as a trial attorney representing local and regional clients in both federal and state court. Henry and Liz also enjoy old movies, old buildings, and old friends. Stephanie says, “The world needs the kind of leaders that JSC corps members aspire to be. I am pleased to be able to support their development by serving on the JSC Board of Directors.”
Ready to take the next step? Learn How to Apply